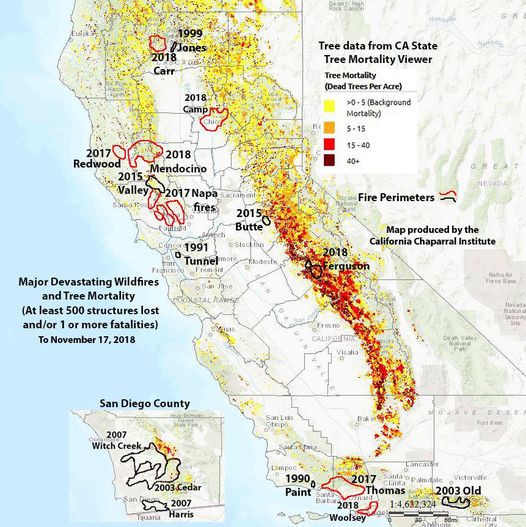 Here’s how to respond to those misleading posts claiming our recent fires are all about tree huggers preventing logging and a supposed fuel build up via past fire suppression.

1. Most of California’s most devastating fires were far from any forest (see map below).

2. For those few devastating fires that were near forests, most if not all of those forests around the communities destroyed had the kind of suggested thinning and fuel treatments misinformed commentators claim didn’t exist.

3. The majority of the area burned during the Camp Fire before it hit the town of Paradise had burned 10 years ago and was composed of habitats other than forest (e.g. post fire shrublands). The wind-driven ember rain that destroyed the town came primarily from these 10-year-old sparse to dense shrublands, grasslands, areas damaged from salvage logging, and young tree plantations northeast of the town. A large percentage of the trees within the devastated town did not burn. See the fire progression map here and match it with the current view on Google Earth:

The Los Angeles Times discussed the science behind the fire’s path:

Here is an excellent map of the fire from the New York Times:

4. Climate change is drying the state. Dryer conditions lead to a more flammable landscape. We may also see more of the kind of winds that powered the Camp Fire into Paradise.

“The major factor is climate change across the west. Regardless of fuels management, we just wouldn’t be burning like this, especially in Northern California, in a normal year.”

More fires will dramatically alter the kinds of habitats we are used to seeing. Highly flammable, non-native weed filled landscapes that dominate places like Riverside County will likely become more common. More on this issue here:

It is more than discouraging when someone claims our wildfires are all about forests, dead trees, lack of logging, or unnatural fuel build up via past fire suppression. Such claims are a disservice to the families who have lost so much and hamper our efforts to solve the problem.

What is it about? Flammable homes and communities located in fire corridors (where fires have burned historically or are likely to burn due to topography).

Please see our solutions and understand why Governor Brown and the California State Legislature failed us – they ignored the real problem:

Here is a well-researched article on the Woolsey Fire from the LA Times:

Here’s how to protect your home from wildfire:

An explanation why much of what you hear about forests and dead trees is inaccurate:

Here are the most devastating wildfires in California to November 22, 2018 as per Cal Fire’s list of 20 (fire, structures burned, fatalities):

Mendocino/ 277/ 1 (forest burned within fire perimeter, but not generally involved in losses)

Previous devastating fires prior to 2017 where losses were also unrelated to forests and dead trees:

*Camp Fire involved forest inside the fire perimeter, but most of the area within the fire’s path prior to hitting the town of Paradise was a mix of habitats.